Jungle Emperor is Osamu Tezuka's most popular works. The story elements and plots take place back-after-back-after-back, which is a common occurrence in Osamu Tezuka's early works of manga. There are two main versions of the manga: the original 50s version and the three-volume 1977 "Complete Works" reprint that is most widely referenced and printed today.

Osamu Tezuka had planned the manga originally as a one–shot titled Mitsurin Taitei [密林大帝] – literally “Dense Forest Emperor”. Then, publisher Kenichi Kato convinced the then young Osamu Tezuka to expand on his idea and change it to a four–page feature in the monthly Manga Shonen.  The manga debuted in November 1950 with a new name, titled, Junguru Taitei [ジャングル大帝], or “Jungle Emperor”, which sounded more exotic and eye-catching. The manga was extremely popular from the get-go and the manga expanded to ten pages the next issue in December.

National Broadcasting Company (NBC) approached Osamu Tezuka in late 1964 for a television series, after the success of the previous series, Astro Boy (1963), and was trilled to pitch the series to them.

During production of the television series, some of the original artwork was lost due a studio staff member stealing/"borrowing" some of the artwork pages and taking it to his apartment, wanting to reference the work. The staff member had unexpectedly passed away and police had cleared out the staff member's apartment, taking the original artwork in the process. Tezuka had tried to rush to the man's apartment once he had realized that the staff member had the artwork, but it was already too late. While back-ups of the prints existed and were still recoverable, printing plates were extremely expensive at the time. Therefore, the original version remained lost to the public for many years.

In 2009, the original 1950s version was restored using secondary sources twenty years after Osamu Tezuka's death. This release is known as the Manga Shonen Deluxe Limited Edition (漫画少年版 ジャングル大帝 豪華限定版) This was possible due to the progression of digital technology. This version has been reissued in 2010 (Manga Shonen Popular Edition (漫画少年版 ジャングル大帝 普及版)) with a few pages in color.


Tezuka had edited his manga many times up to the last release of the manga before his death in 1989. For example in 1958-59, a reissue of the 1950 serial manga was released known as "The Kobunsha Edition" (ジャングル大帝 光文社版). Tezuka had colorized some pages of his original artwork and expanded on many scenes to help with pacing. This version was also given a release in 2016.

Complete Manga Works Edition or also known as the 70s version is a semi-redrawn print of the manga. At the time, Tezuka had to re-draw the missing portions of the artwork in order to re-release the Jungle Emperor manga in a book format. The re-drawn portions were based on The Kobunsha Edition and subsequent releases of the manga for the expanded scenes.

This version had been used in all of the translations and most subsequent reprints of the manga.

Some characters as they appear in the manga 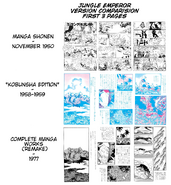 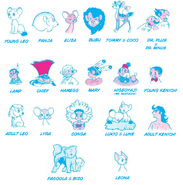 Retrieved from "https://kimba.fandom.com/wiki/Jungle_Emperor_(manga)?oldid=13437"
Community content is available under CC-BY-SA unless otherwise noted.